The MAF sensor is used to measure the mass flowrate of air entering the engine. This measurement is used by the car computer to establish the amount of fuel to add to provide an optimal combustion. 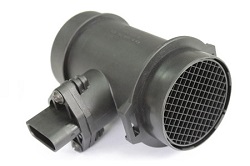 The MAF (Mass Air Flow) sensor is fitted to the inlet after the air filter box and before the throttle body. Its purpose is to measure the filtrated air flow and provide this information to the car computer (ECU – Engine Control Unit).

Some engine designs use a MAP sensor instead of a MAF sensor or in combination with a MAP sensor.

The MAF sensor consists of a wire within a housing. At the front of this housing a coarse grained mesh is fitted to smooth out the airflow, so that a stable reading can done by the MAF sensor. The wire is heated to a either a constant voltage over the wire or a constant current through the wire. The wire's electrical resistance increases as the wire’s temperature increases, which varies the electrical current flowing through the circuit (Ohms law). When air flows past the wire, the wire cools, decreasing its resistance, which in turn allows more current to flow through the circuit, since the supply voltage is a constant. As more current flows, the wire’s temperature increases until the resistance reaches equilibrium again. The current increase or decrease is proportional to the mass of air flowing past the wire. The integrated electronic circuit converts the proportional measurement into a calibrated signal which is sent to the ECU.

The MAF sensor usually consists of 3 or 4 wires, one wire for the signal, one for power from the battery, and one or two wires for ground (one of the ground wires on a 4 wire configuration is the ground for the signal). More wires than 4 is usually used when the IAT is an integrated part with the MAF sensor.

To identify the ground, measure continuity with the key removed from the ignition.

To identify the power wire, measure volts between the battery ground and the remaining wire(s) with key in ignition position. The wire that shows +12V will be the power wire.

The last wire will be the signal wire. The signal on a hot wire MAF can either be analog or digital. The analog signal is measured in voltage, whereas the digital signal is a frequency, and the frequency (measured in hertz) determines the amount of air flow. To identify whether the signal is analog or digital, a scan tool can be used. The scan tool will provide the MAF signal output in Hz or V combined with grams/Second. 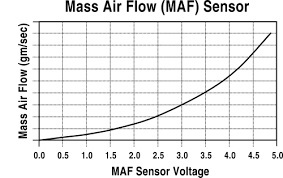 The analog signal will operate between 0V and 5V and can be measured using a voltmeter. At ignition, the signal will be 0V to 0.75V (no air flow). At idle it should be around 1V to 2V and gradually increase as you increase the RPMs. The voltage at idle should not fluctuate and stay persistent. On a scope you should see a steady graph. The maximum signal is 5V but not attainable by increasing RPMs on a stationary car, and you will need to drive the car and introduce a heavy load and high speed. 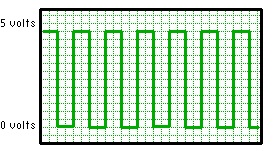 The digital signal constantly switches between 0V and 5V and the number of times it changes during a second identifies the frequency. At idle you should see around 2000 Hz (or 2KHz) to 2500 Hz gradually increasing with the RPM up to 6000 Hz. Due to the high hertz a voltmeter is not a suitable device to measure this, as it will display the average value of the frequency. Instead an oscilloscope is needed that can measure frequent enough to display graphs that will allow you to see the exact frequency at any given time.

With time dirt and contaminants in the air is burnt on the hot wire deteriorating its accuracy. The most common symptom of this contamination is a hesitation or a time-lag in engine response that is felt after the accelerator pedal is depressed. Some of the surface contaminants can be removed using electronic s spray cleaner or a similar solvent spray or by keeping it submersed within a solvent for a period of time. Some MAF sensors incorporate a self-clean feature very similar to self-cleaning ovens where the wire temperature is increased to very high temperature in order to burn off any contaminants. This feature is typically enabled when the engine is turned off.