Flooding of fuel in the combustion chamber will result in inefficient lubrication and increased wear and tear, which will ultimately result in increased oil consumption. 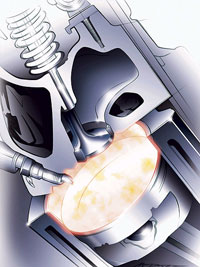 If the combustion chamber is flooded repeatedly with fuel then remains of fuel is left over after combustion. The remaining fuel sticks to the cylinder walls and dilutes the lubrication provided by the engine oil. The increased friction increases wear on the piston, piston rings and cylinder walls which ultimately results in increased oil consumption.

* When ECUs are reprogrammed due to engine upgrades, tuners will often try to increase power beyond the reasonable parameters of the engine components. As a result these components will produce more heat. To combat this,b tuners will richen the mixture as this increases cooling. If the mixture is too rich, the wear is too high on the components and they will fail prematurely leading to increased oil consumption.