A Turbo is run by the exhaust gasses. Its main function is to compress air and force it into engine, thereby more fuel can be burnt and thus more power can be generated. 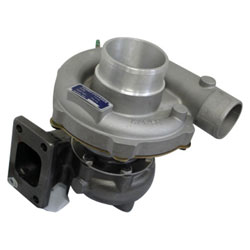 On the other hand of the shaft is the impellor, or compressor wheel. This pulls air in and the forces into the engine. For this to work effectively, the impellor wheel typically spins at 120,000 – 150,000 RPM (Revolutions Per Minute).


How A Turbo Works 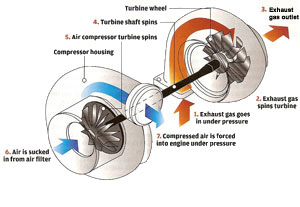 Turbos rely on the flow of the exhaust gas through the turbine housing, they only start to spin after ignition has taken place and so there is a delay between opening the throttle and the turbo spinning and producing boost. This is known as ‘turbo lag’ and is considered to be a downside compared to superchargers.

The turbine and impeller are each contained within their own housing on opposite sides. These housings collect and direct the gas flow. The size and shape can dictate some performance characteristics of the overall turbocharger. The area of the cone to radius from center hub is expressed as a ratio (AR, A/R, or A:R). Often the same basic turbocharger assembly will be available from the manufacturer with multiple AR choices for the turbine housing and sometimes the compressor cover as well. This allows the designer of the engine system to tailor the compromises between performance, response, and efficiency to application or preference. 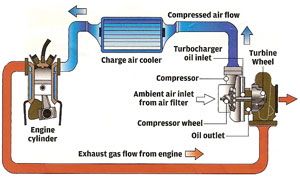 By spinning at a relatively high speed the compressor turbine draws in a large volume of air and forces it into the engine. As the turbocharger's output flow volume exceeds the engine's volumetric flow, air pressure in the intake system begins to build, often called boost. The speed at which the assembly spins is proportional to the pressure of the compressed air and total mass of air flow being moved. Since a turbo can spin to RPMs far beyond what is needed, or of what it is safely capable of, the speed must be controlled. A wastegate is the most common mechanical speed control system, and is often further augmented by an electronic boost controller.

The implementation of a turbocharger is to increase engine power (compared to a NA engine) by solving one of its cardinal limitations. A naturally aspirated engine uses only the downward stroke of a piston to create an area of low pressure in order to draw air into the cylinder. Since the number of air and fuel molecules determine the potential energy available to force the piston down on the combustion stroke, and because of the relatively constant pressure of the atmosphere, there ultimately will be a limit to the amount of air and consequently fuel filling the combustion chamber. This ability to fill the cylinder with air is its volumetric efficiency. Since the turbocharger increases the pressure at the point where air is entering the cylinder, and the amount of air brought into the cylinder is largely a function of time and pressure, more air will be drawn in as the pressure increases. The intake pressure can be controllably increased with the turbocharger, compared to a NA engine where it is determined by the atmosphere,