The engine cylinder block is where the main rotating components live and can be considered the heart of the engine, where all the plumbing takes place. It houses the crankshaft, conrods, pistons, oil system and water pump. 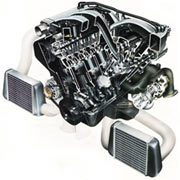 Several things can be done to improve the performance of parent metal for cylinder bores, such as plasma-coating or Nikasil-plating, but the best solution is to use liners. Then, each material can be chosen to do the best job that is required of it, without forcing a compromise.

There are a series of oil galleries within the cylinder block, designed to feed essential parts of the engine with the lubricant. Also, there are waterways around each cylinder, to allow coolant to flow around them and carry heat away to the radiator.

Vibrations are reduced as much as possible by balancing the rotating components. The conrods have a reciprocating component to their mass, as well as a rotating component, and are usually balanced as sets, to make sure the forces they exert are at least equal for each cylinder. The crankshaft will be balanced on its own, so that it rotates with no vibrational forces within it and pistons are matched as a set, to ensure they are also all equal weight.