From a mixture flow point of view, there are the three main parts of the head: the inlet ports, the combustion chambers and exhaust ports. 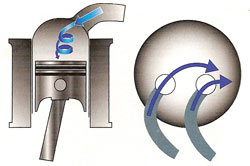 Most cylinder heads nowadays feature multiple valves for each combustion chamber, and three, four and even five-valve designs are becoming common.

The reason for having multiple valves is two-fold. Two smaller valves will give a greater valve area for the air/fuel mixture to flow through than a single valve that would fit in the same space. In addition, the smaller valve head and associated part will keep the air speed into the engine high, which is one of the key design factors. Take a hosepipe. Now put your thumb over the end to see how much further the water goes, even though the same amount actually flows out.

Typically, inlet valves are larger than the exhausts, because there is a greater pressure difference across the exhausts valves when they are open, so they don’t need to be as big.

For the exhaust valves, the greater difference comes about because of the pressure within the chamber following the combustion process. For the inlets, the pressure difference can’t be any greater than atmospheric pressure for a normally-aspirated engine and perhaps one or two bar more for a turbo engine. So the larger the valve area, the more mixture can flow for a given time and pressure difference.

The ports are designed to get as much mixture moving as quickly as possible as it enters the combustion chamber. This is firstly to prevent fuel in the mixture from dropping out on the port or cylinder walls and, more importantly, to make sure that the fuel is spread evenly throughout the chamber when the spark fires.

The air/fuel mixture tumbles through the port and down into the cylinder. This is usually followed by micro-turbulence, with vortexes of mixture speeding up as the piston starts to rise. “Swirl”, conversely, is horizontal rotation of the mixture as it enters the cylinder. This technique is used in ‘stratified charged engines’, where air rotates tightly around the spark plug, and the fuel is directly injected, giving a very clean burn.

Another technique is called ‘squish’. As the piston moves up, it creates more turbulence and forces any potential pockets of ait/fuel mixture back towards the spark plug.