The ratio between bore and stroke can determine the general characteristics of an engine and how it behaves. 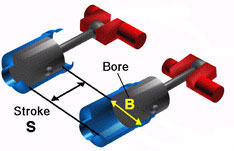 An engine’s bore and stroke are generally chosen to keep the piston speed to a reasonable level (around 20m/s maximum for a road car, while race engines can generally sustain 27m/s or so).

A big-bore, short-stroke engine will have the piston traveling a shorter distance than one with a longer stroke but smaller bore, and this will help keep the piston speed down. In addition, the bigger the bore, the larger the valves that can be fitted inside the combustion chamber, leading to potentially more air into and out of the engine.

Because of the shorter distances a big-bore engine’s pistons have to travel, such an engine will tend to be quite free-revving and will make power higher up the rev range than an equivalent long-stroke engine. However, the long-stroke engine will normally be tuned to give more torque, for a given cylinder pressure, at lower engine speeds, since it will not perform as well as the engine speed rises.