The job of the piston is to turn gas pressure in the combustion chamber into linear motion, up and down the cylinder bore. 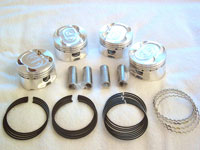 The basic parts of the piston are the crown (which is the top portion where the explosives forces act), the ring grooves (where the pressure-sealing rings go) and the skirt (which is the area that sits against the bore wall).

Pistons are generally cast or forged, then machined to ensure they fit perfectly within the bore. As with cranks, forged pistons tend to have greater inherent strength. The shape of the crown will be determined by various factors, including the design of the combustion chamber, the required compression ratio and the amount the valves open. Some engines use flat-top designs, while others have a domed crown or even a multi-angle wedge.

The piston rings are designed to prevent oil from below the piston going up and combustion pressure from leaking down, as this would be wasted pressure. The gas pressure within the combustion chamber helps the rings to seal against the cylinder wall. Generally, there will be two or three rings. The top ring will usually prevent some 80% of the pressure from getting past while the second ring, if applicable; will prevent the rest of the pressure escaping. It will also help to remove remaining oil from the cylinder wall, to prevent it getting burned as the piston passes down on the combustion stroke.

You can see from this that there will be high friction forces generated by the piston/ring/cylinder bore interaction. So clearly, reducing friction will effectively boost the engine’s output, as well as lead to a longer component life. Part of this comes from the design of the piston, with ‘slipper’ skirts removing material from the piston’s skirt where there are no sideways loadings.

However, material remains where the piston will experience high sideways loadings, such as across the bore. Reducing friction is another reason, why the liners need to retain precious oil.

Another aspect to consider is temperature. Fatigue resistance drops as temperature goes up and for this reason, very high performance engines can have oil squirt jets directed to the bottom of the piston, to cool them. Typically these will be aimed at the underside of the crown, for durability but also to reduce detonation.