Fuel injection is an advanced method of introducing the fuel into the engine. 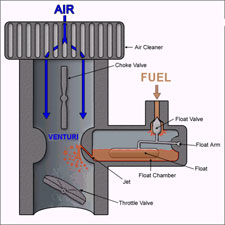 A carburetor basically consists of an open pipe, a "throat" or "barrel" through which the air passes into the inlet manifold of the engine. The pipe is in the form of a venturi it narrows in section and then widens again, causing the airflow to increase in speed in the narrowest part. Below the venturi is a butterfly valve called the throttle valve — a rotating disc that can be turned end-on to the airflow, so as to hardly restrict the flow at all, or can be rotated so that it (almost) completely blocks the flow of air. This valve controls the flow of air through the carburetor throat and thus the quantity of air/fuel mixture the system will deliver, thereby regulating engine power and speed. The throttle is connected, usually through a cable or a mechanical linkage of rods and joints, to the accelerator pedal on a car or the equivalent control on other vehicles or equipment. Fuel is introduced into the air stream through small holes at the narrowest part of the venturi. Fuel flow in response to a particular pressure drop in the venturi is adjusted by means of precisely-calibrated orifices, referred to as jets, in the fuel path. 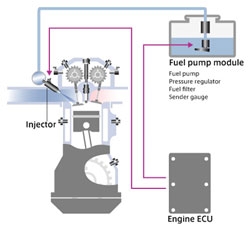 Fuel injection, on the other hand, is a much more advanced method of introducing the fuel into the engine. Running under high pressure, fuel is forced through a small nozzle, atomising it into tiny droplets, which get distributed throughout the moving air to give an efficient and clean burn.

That’s the theory anyway. Road car systems are inevitably designed to give the best combination of performance and clean emissions. The advantage of injection is that exactly the right amount of fuel can be added at the right time to create perfect burn. Accurate control means that this happens for every cycle of the engine.