The fuel injector acts as the fuel-dispensing nozzle. It injects liquid fuel directly into the engine's air stream. In almost all cases this requires an external pump. The pump and injector are only two of several components in a complete fuel injection system. 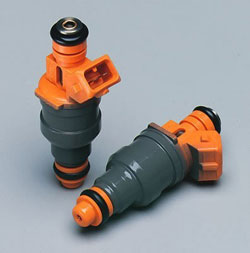 The injectors are usually fitted into the inlet manifold and inject pressurised fuel into the air stream entering the combustion chamber.

The electronic fuel injector is normally closed, and opens to inject pressurised fuel as long as electricity is applied to the injector's solenoid coil. The duration of this operation, called pulse width, is proportional to the amount of fuel desired. The electric pulse may applied in closely-controlled sequence with the valve events on each individual cylinder (in a sequential fuel injection system), or in groups of less than the total number of injectors (in a batch fire system).

Since the nature of fuel injection dispenses fuel in discrete amounts, and since the nature of the 4-stroke-cycle engine has discrete induction (air-intake) events, the ECU calculates fuel in discrete amounts. In a sequential system, the injected fuel mass is tailored for each individual induction event. Every induction event, of every cylinder, of the entire engine, is a separate fuel mass calculation, and each injector receives a unique pulse width based on that cylinder's fuel requirements.

It is necessary to know the mass of air the engine "breathes" during each induction event. This is proportional to the intake manifold's air pressure/temperature, which is proportional to throttle position. The amount of air inducted in each intake event is known as "air-charge", and this can be determined using a MAF/MAP sensor.

The three elemental ingredients for combustion are fuel, air and ignition. However, complete combustion can only occur if the air and fuel is present in the exact stoichiometric ratio, which allows all the carbon and hydrogen from the fuel to combine with all the oxygen in the air, with no undesirable polluting leftovers. Oxygen sensors monitor the amount of oxygen in the exhaust, and the ECU uses this information to adjust the air-to-fuel ratio in real-time.

One benefit of a well-presented fuel delivery to the air is that the fuel will evaporate (turn to vapour) as it enters the air stream, removing heat from the surrounding air. This leads to both a slightly denser air charge – allowing more fuel to be burned and hence giving more torque – while also helping to reduce the likelihood of detonation within the engine.

If it’s done properly, with the enough time for the fuel to vaporise, then this can improve overall efficiency by up to 3 per cent. This is why running an engine slightly rich (excessive fuel for the amount of air) can sometimes help to give a cooling effect. The ideal ratio of air to fuel, where the fuel will burn completely (known as the Stoichiometric ratio) is 14.6:1 air/fuel.

However, high performance and race engine tend to run slightly rich to exploit this cooling effect. In addition, turbo engines also tend to have a slight excess of fuel for the same reason. An engine running lean can suffer from detonation, though, as it can’t generally handle as much spark advance.

Something else to consider is that fuel in the air stream will displace air, so its important to get the balance between the two right. This is one of the reasons that direct engine is good – all the air is in the engine before you introduce the fuel, so it cant displace air. However, it also means that there’s a very short amount of time for the fuel to vaporise, and hence reduce the temperature by a significant degree.

Additionally the octane rating of the fuel is of importance. The octane rating for the fuel basically indicates the amount it can be compressed before it ignites spontaneously, or detonates. So a higher octane-rated fuel will be able to deal with higher compression ratios or boost pressures better than a lower one, and will resist detonation much better.

Different fuels can also oxygenate the mixture as more air is pumped in. the best pump fuel is rated at 98 octane (Super) but for motor-sport applications, fuels with octane ratings up to 117 (C17) can be used.