Oxygen sensors measure the oxygen within the exhaust gasses to identify whether the combustion is lean/rich. The ECU uses the O2 sensor signal to regulate fuel to ensure an optimal combustion and minimizing emissions. 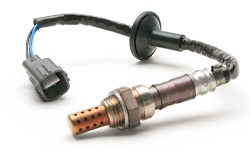 Oxygen sensors (also called O2 sensors) are fitted inside the exhaust near the point where the exhaust manifold merges from each cylinder into the main pipe. On more modern cars there will be another oxygen sensor fitted in the exhaust pipe after the catalytic converter.

The information is gathered by measuring the amount of Oxygen (O2) within the combustion gasses and comparing it to the ambient (outside) oxygen level. The information is then sent as a signal back to the ECU. The signal will be between 0 volt (much oxygen detected) and 1 volt (less oxygen detected). The optimal value is around 0.45-0.5 V which is considered stoichiometric air-fuel ratio (14.7 parts of air to 1 part of fuel).

The downstream O2 sensor signal is compared to the upstream signal to ensure that they are not close/identical, as that would indicate that the catalytic converter is not operating as it should. 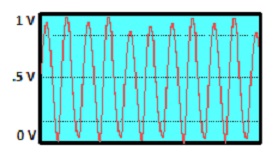 When the ECU adds more fuel due to a lean signal the signal becomes rich, and to resolve this, the ECU will decrease fuel again introducing a lean signal. This flip-flop goes on constantly, so a perfectly normal O2 signal on a warm engine at idle will switch between 0.1V and 0.9V constantly. This allows the catalytic converter to operate at peak efficiency while keeping the average overall fuel mixture in proper balance to minimize emissions.

The operation of O2 Sensor requires that the sensor is at operating temperature, which is around 325 °C/600 F. The heating of an O2 sensor is either done via the exhaust gassses or via a heating element. An O2 sensor that is cold, will not provide a signal and the ECU therefore has a mode in which it will not use the O2 signal. This mode is called "open loop". When the O2 signal is being used, it is referred to as "closed loop". The ECU may use other parameters to go from closed loop to open loop, such as wide-open-throttle or when lifting of the gas.

Unfortunately the different manufacturers use different color wirings, and therefore the exact color of each wire has to be looked up in a wiring diagram in the workshop manual. For the heated O2 sensors, the heating wires will usually be the same color.

There are 4 basic tests of an upstream O2 Sensor. All tests should be performed with the O2 sensor fitted in the exhaust.

On the 3 Wire and 4 Wire configurations, disconnect the O2 sensor plug and check that the heating element is working, by checking continuity and resistance on the heating wires. The resistance should be between 10-20 ohms.

Connect the plug back and check the signal wire (with an oscilloscope) for an oscillating signal switching between 0.1V and 0.9V on idle. The O2 sensor has to be at operating temperature before the signal is measured correctly. This can be checked by a scan tool to ensure closed loop mode or by driving the car with semi-open throttle (not wide open) for a small period of time before measuring. If the switching is less, say 0.4V to 0.6V then the O2 sensor is considered worn.

Check the signal wire (with an oscilloscope) decreasing to 0.1 V when you introduce an immediate lean state, for example by creating a vacuum leak. The test has to be immediate, as a longer span of time will allow the ECU to regulate the fuel to compensate for the extra air and not show a lean state.

Check the signal wire (with an oscilloscope) increasing to 0.9 V when you introduce an immediate rich state, for example by adding propane gas to the inlet. The test has to be immediate, as a longer span of time will allow the ECU to regulate the fuel to compensate for lack of air and not show a richstate.

If any of the tests fail, then the upstream O2 Sensor should be replaced.

On a downstream O2 sensor, the heating element should be checked in the same manner as the upstream O2 sensor. The signal will however not flip-flop from 0.1V to 0.9V, but instead stay somewhat stable around 0.5V. This is also a confirmation of the catalytic converter doing its job.