Air-Fuel sensors measure the oxygen within the exhaust gasses to identify whether the combustion is lean/rich. The ECU uses the Air/Fuel sensor signal to regulate fuel to ensure an optimal combustion and minimizing emissions. 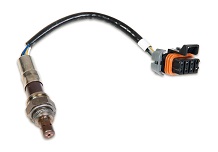 Air/Fuel sensors (also called A/F sensors or wideband O2 sensor) are fitted inside the exhaust near the point where the exhaust manifold merges from each cylinder into the main pipe.

There may be one or multiple fitted A/F sensors in total on the car (one for each bank). The information from the A/F sensor is sent to the car computer (ECU - Engine Control Unit), which uses the information to regulate the fuel provided to the combustion. Some manufacturers use O2 sensors to implement the same function as the A/F sensor, however the O2 sensor is consider a narrowband O2 sensor, as its reporting range is narrower than the A/F Sensor.

The signal generated by the A/F sensor has a constant voltage, but varying current. The voltage is unfortunately not standardized (as it is with O2 sensors) but can be of any value depending on manufacturer/model of the car. The X voltage is also of less interest, as the current is of importance. The current is measured in mA (mill amperes) and will report through polarity change.

An A/F sensor signal increasing from 0 to positive tells the ECU that the combustion contains more oxygen and is therefore considered lean, and to resolve this more fuel has to be added. If the signal polarity changes from 0 to negative, the ECU is told that less oxygen is present and therefore considered rich, and to resolve this less fuel has to be added.

The O2 sensor in comparison reports between 0.1 and 0.9V, however this signal is seen by the ECU more as LEAN state or RICH state flagging , and not degrees of LEAN and RICH, thereby the name given to it 'narrowband O2 sensor'. The A/F sensor reports in degrees of LEAN or RICH state and is therefore also called a 'wideband O2 sensor'. Due to the A/F sensor being more competent than the O2 sensor, we will with time see more usage of A/F sensors instead of O2 sensors to manage the air-fuel ratio.

The A/F sensor and the O2 sensor are very similar in shape. To distinguish the two a scan tool has to be used. If the scan tool is reporting the upstream sensor(s) in voltage, they are most likely O2 sensor(s). If the scan tool is reporting the signal in current (mA) that the sensor is an A/F sensor. Some scan tools will (to simplify) convert the current signal into a voltage signal as the ECU sees it. If your scan tool displays voltage you need to know what voltage is considered stoichiometric in order to identify lean/rich state as the voltage differs from the baseline.

Some scan tools will also show an equivalent ratio which is a great diagnostic measure to verify the A/F sensor is operational. The equivalent ratio sets stoichiometric at 1 regardless of the voltage used by the manufacturer/model. If your scan tool is showing voltage instead of mA, then the equivalent ratio can be used to read the signal. If the ratio is greater than 1 than the combustion is considered lean, and a ratio less than 1 is considered a rich condition.

The operation of A/F Sensor requires that the sensor is at operating temperature, which is around 705 °C/1300 F. The heating of an A/F sensor is at engine startup or at ignition. An A/F sensor that is cold, will not provide a signal and the ECU therefore has a mode in which it will not use the A/F signal. This mode is called "open loop". When the A/F signal is being used, it is referred to as "closed loop". The ECU may use other parameters to go from closed loop to open loop, such as wide-open-throttle or when lifting of the gas.

A/F Sensors come in 4 Wire configuration. One wire is used for the signal, one for ground. The two other wires are used for heater so that the A/F sensor can be heated electronically.

There are 3 basic tests of an A/F Sensor. All tests should be performed with the A/F sensor fitted in the exhaust.

Disconnect the A/F sensor plug and check that the heating element is working, by checking continuity and resistance on the heating wires (usually the two wires with the same color). The resistance should be between 10-20 ohms.

Check the signal wire (with an oscilloscope) going sharply into negative polarity and increasing mA when you introduce an immediate wide open throttle.

As you let go of the throttle the signal should jump swiftly into positive polarity and increasing mA to show the lean state and then slowly stabilizing itself back to 0 (stoichiometric ratio).

If any of the tests fail, then the A/F Sensor should be replaced.

The sensors are designed to last upwards of 150,000 miles but may not go the distance if it is contaminated through the engine burning oil or an internal coolant leak.