Fuses are designed to break a circuit when a predetermined current is reached, in order to protect the components and wiring which could be damaged by excessive current flow.

Any excessive current flow will be due to a fault in the circuit, usually a short circuit.

Fuses are fitted inside fuse boxes in the engine compartment and inside/under the dashboard. Fuses are built to be visually inspected to verify that they are intact.

The wire within the fuse should be visible. If the wire is broken or melted, the fuse is blown and the circuit is now an open circuit. 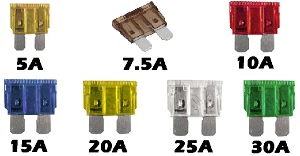 Never renew a fuse more than once if it keeps blowing without tracing the source of the problem. A short to earth is the most likely cause. Where a fuse protects multiple circuits, try to isolate the fault by switching on each circuit individually until the fuse blows again. 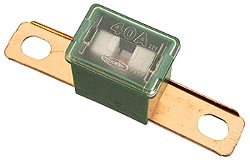 Fusible links are identical to fuses in operation, however differ in that they are higher rating and require fasteners to secure, whereas fuses are push-in/pull-out.