The wheel must have the right measurements to fit the car. These measurements include number of bolts/studs, PCD, center spigot size and the ET (offset).

The following wheel measurements are of importance: 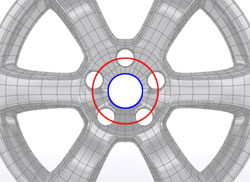 The image to the left shows the PCD (the red ring and mounting hole centrelines) and the spigot size (the blue ring). The spigot hole on an alloy is normally covered up with a centre cap or cover.

The offset of the wheel is also of importance. The offset is the distance in mm between the centre line of the wheel rim, and the line through the fixing face. An incorrect offset can result in many problems such as:

The offset can be postive, negative or neither. This determines how the suspension and self-centring steering behave. This figure will be stamped on the wheel somewhere as an ET figure.

Typically you can get away with 5mm - 7mm difference from the car manufacturer specification before you'll run into trouble with the wheels fouling the suspension/bodywork, or affecting the steering properties. 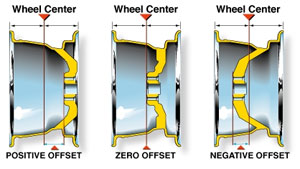 When you increase the offset of a wheel, you decrease the clearance between the inner edge of the wheel and the suspension components. In the image example, the left wheel has a positive offset - ie. the distance from the mounting face to the centreline of the wheel is larger than that of the right wheel.

This means a 5-bolt pattern on an circle of 120mm diameter and an offset of 42mm ( typical BMW wheel measurements).