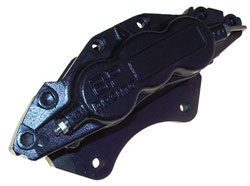 The size of the pad itself and the clamping force that is used to generate the friction is ultimately a function of the design of the caliper, which houses the pistons used to compress the pads onto the disc. Many road car calipers use a singlesided design on sliding pins. This means the piston or pistons are only on one side of the caliper, usually the inside, and as they extend to press that pad against the disc, the reaction causes the whole caliper to slide on pins and pull the opposite pad onto the disc as well.

A better option is to have at least a pair of pistons, one on each side of the caliper, forcing the pads onto the disc evenly. However, this inevitably increases the thickness of the caliper, which can cause problems with the amount of space behind the wheel.

The number and size of the pistons in the caliper will be chosen to match the car. For example, a heavy car may have four-piston calipers, to allow a bigger pad to be used to generate the required braking force.

As a rough rule of thumb a four-piston caliper can handle a 131mm long pad while a six-piston version will allow 152mm long pads. And because the amount of friction generated is directly related to the size of the pad contact area and the force clamping it, a bigger pad will give stronger brakes, with all other factors being equal.

Another benefit of multiple-piston calipers is to combat pad tapering. When braking is taking place, the surface of the pad gets hot and if it gets hot enough, the material can begin to melt as the metallic elements used become molten. As it does so, it begins to flow in the same direction as the rotation of the disc and this in turn leads to the pad becoming wedgeshaped. So a smaller piston at the leading edge of the pad and a larger one at the trailing edge will provide more force to the area where the material will build up and help to keep the pad flat against the disc.