The clutch is used to separate the engine and gearbox so that the driver can change gear.

An essential part of the transmission system is the clutch. It is used to separate the engine and gearbox so that the driver can change gear. It also allows a progressive take up of drive for smooth pull-aways. A pressure plate is fixed to the input shaft of the gearbox and is sandwiched between the clutch cover and the flywheel.

The cover is fixed to the flywheel and provides the clamping force to generate friction, which causes the pressure plate to start spinning as the clutch is engaged. A normal road car would have a circular pressure plate with a full, round face of organic friction material on each side,

In normal use, this is fine. However, start producing more torque and you can get clutch slip.

The amount of torque that a clutch can transmit is determined by the cover, The more clamping force it generates, the more torque can be transmitted, However, to do this it requires stronger finger springs and if the clutch clamps harder, it will be harder to disengage.

The pressure plate design and material determine how much abuse the clutch will handle in operation. For example, a full-face pressure plate with an uprated friction material will generate a lot of heat over its entire surface. 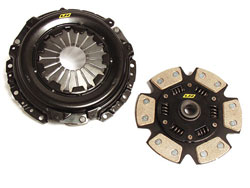 So to reduce the amount of heat, a paddle plate can be used, where there are four or six arms, each with a pad of friction material at the end.

Not only does this generate less heat, it also reduces the inertia of the gearbox side of the clutch, allowing it to slow down faster for quicker gear changes.

The plates can also include rotational springs to give smoother operation by absorbing judder. However, for motorsport these would usually be done away with.

A road car would typically have an organic full-face plate, a competition car on a synchro gearbox would probably have a six-paddle sprung plate, a rally car would have a solid fourpaddle plate, and a dog box, well, take your pick. They only need to clutch to get off the line.