The main components of the suspension, that do the work are the springs and the dampers. 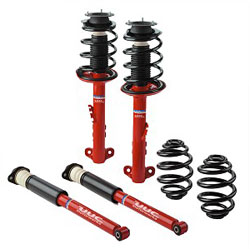 There are two main forms of springs - coil springs and torsion bars. A torsion bar is basically a coil spring stretched out straight. Coil springs tend to be more prevalent because they're easy to manufacture and create a relatively compact suspension unit. Spring strength is expressed as the force required to compress the spring by a known distance, eg a 300lb/in spring will need 300lbs to compress it one inch.

Springs can either have a linear rate, where the force required remains the same regardless of the actual compression, or a progressive rate, where the force increases as the compression does. The majority of springs will be linear, but progressive ones can work well on road cars. This is because there will be a relatively soft section, perhaps the first 0.5in of travel, to allow the suspension to soak up road imperfections as the car drives in a straight line. However, when the car loads up for a corner, the spring moves through the soft section and becomes much firmer, to control weight transfer and keep the wheel on the road.

Torsion bar suspension tends to be a feature primarily of French cars and is used mainly because it's a cheap way of providing spring force in a small amount of space. On small cars, like the Peugeot 106 or Citroen Saxo, it means the boot floor can be as low as possible, to give maximum space. A bar of spring steel is fixed to the wheel hub via a linkage at one end and the chassis at the other. Usually, this would be in the middle of the car, inside a protective tube which forms part of the car's structure. 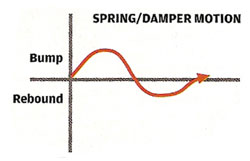 It's the job of the dampers to control the movement of the springs. Consider a spring fixed to the ceiling with a bowling ball hanging from it. Lift the ball up and let go and the spring will bounce up and down for ages, until it eventually loses its energy. It would be the same for a car without a damper, which is designed to allow only one complete oscillation of the spring from its starting position, ie one upward and one downward movement before coming to rest again.

There are two main designs of dampers: mono-tube or twin-tube varieties. Both feature one end fixed to the chassis and the other to the hub. Typically, the end that mounts to the chassis has a piston which sits in a reservoir of oil, while the other houses the oil reservoir. On a mono-tube damper, there is a single reservoir and the damping action comes from oil flowing through holes or valves in the piston as it moves up and down through the oil. On a twin-tube damper, as the piston moves up and down, not only does oil flow through it but it also flows out of the reservoir and into a secondary area.

Any damper will have an air gap above the oil, since it's necessary to allow for the differing volume of the piston rod as it moves up and down. However, if a damper is working extremely hard, the oil can begin to froth on the surface, while the air also begins to heat up. This then transfers heat into the oil and it loses viscosity and hence its ability to control the spring movement correctly. So in some cases, the air is replaced by nitrogen, or a bag of gas, which is more stable under the action of heat and helps keep the oil in the right state. This type of unit is known as a gascharged damper.

As the damper moves up and down, it will have particular damping characteristics in each direction. The movement of the wheel, and hence the suspension, is known as bump (compression) and rebound (extension). However, for serious applications, such as fast road, track day cars or race/rally cars, the damping can be altered, creating adjustable dampers. The important thing with adjustable dampers is knowing what is adjustable. For the majority of adjustables, it will be rebound, ie when the wheel travels back down after a bump. However, some dampers are adjustable for bump. And for very serious uses, like motorsport, dampers can be adjustable independently for bump and rebound.

However, like tweaking anything, if you're using adjustable dampers, it's important to start from a base setting and work gradually. If you go too far on the rebound, for example, you could get a situation where the suspension jacks itself down, particularly over rough roads. Here, the suspension would compress but if the rebound is much stiffer the bump, the wheel won't be able to return to its normal position before the next bump. So as you go over more bumps, the suspension compresses further and further, until you run out of travel and the car skips over the bumps and loses grip.

And then we get into high and low speed bump and rebound situatons. Basically, the characteristics of the damper may need to be different depending on the speed the suspension compresses at. For example, on smooth sweeping fast roads, you may want the suspenion to load up progressively as the car rolls. But on bumpier roads, you may want faster reactions as the wheels will be travelling up and down much faster.

The way the damper is designed can create different ratios between bump and rebound settings at different speeds, ranging anywhere between 1:1 to 3:1 rebound:bump.