The differential allows the driven wheels to turn at different speeds. 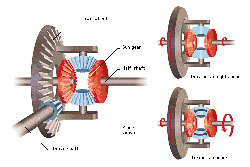 This is necessary because as the car corners, the outer wheels will turn on a larger circle than the inner, and hence will spin faster. However, one wheel can have better grip than the other. This type of diff, known as a open diff, will allow all the torque to go to the wheel with no grip, while none goes to the wheel that has. So all the torque goes in wheelspin.

A limited-slip differential (LSD) tries to equalise the wheel speeds so that at least some of the available torque goes to the wheel that has grip, meaning that the car still moves forward.

Viscous diffs use a system of drive plates mounted in a highly viscous fluid. When one starts to spin, it induces motion in the fluid and this causes the other plate to spin, equalising the wheel speeds and giving some drive. But it relies on one wheel spinning before the other can get drive.

Friction plate diffs work on a similar principle to a clutch, where plates of friction material are forced together as one wheel spins. The way the plates come together can be controlled in various ways, the most basic being a pair of pins sitting in V grooves. As one wheel spins, it tries to force the pin up and out of the groove and this pushes the friction plates together. Or a system of hydraulic pressure can be used to force the plates to meet, computercontrolled by measuring wheel speeds or torque through the relevant driveshafts, as on most WRC cars.

Another system is based on intermeshing helical gears and works by sensing the amount of torque going to each wheel. These are either free or locked, where the two wheel speeds are tied equally together. This can induce understeer, since the only time both wheels can turn at the same rate is when the car is going in a straight line.