A camshaft comprises a series of egg-shaped lobes that, as the shaft turns, act on the valve to open it in a straight line. 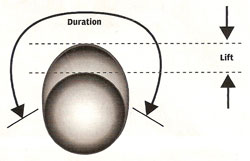 There are several designs that implement the functionality of opening the valves, with the most common being the overhead cam. Typically, the centreline of the camshaft will be directly above the valve and as the cam turns, it pushes against an upturned bucket that sits on the top of the valve. This causes the valve to open directly under the cam. Springs then close it.

Other designs use finger-shaped levers. These are fixed at one end and the other rests on the top of the valve. The cam lobe acts partway along the finger to provide the opening force to the valve. The lever principle here means that the lift the valve sees is more than the physical lift on the cam lobe itself. 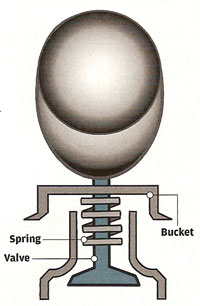 The shape of the lobe on the camshaft provides two main properties: lift and duration. The lift is the maximum amount the valve opens from its closed position, while the duration is the amount of time the valve is open, from the moment it starts to lift to the time it closes. Duration is expressed in degrees of rotation.

Cams are generally cast as blanks, with round portions where the lobes will be. They then undergo machining operations to form the bearing journals, as well as the lobes themselves. Furthermore they are heat and/or chemically treated to increase surface hardness.