The camshafts are driven from the crankshaft, and therefore the valves will open and close at fixed points in the engine cycle. 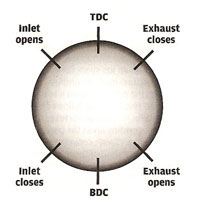 Since the camshafts have a circular design, they go through a circular process. It begins with the inlet valve will open just before the piston reaches top dead centre (TDC) and will close after the piston reaches the bottom of its travel (bottom dead centre –BDC). This is because, despite the piston moving up after BDC, mixture is still flowing into the cylinder by nature of its momentum, and so the longer the valve can stay open, the more mixture can get into the engine. Ideally, the inlet valve should close just as the incoming charge stops moving.

A certain amount of valve overlap is beneficial, as without it the volumetric efficiency of the engine would be compromised. Too much valve overlap can have a negative effect on clean running engine of the engine. Valve overlaps one of the areas where road and race engines differ massively. On the road engines, overlap is typically limited to less than 20° at the crank, while on the race engines; this figure is more like 100°.

The reason for this is that the outgoing exhaust gas helps the incoming air move before the piston begins its travel down the bore, leading to more air entering the cylinder.

Inevitably some of the incoming air/fuel can flow past the exhaust valve and out of the engine, but that’s a small price to pay for the additional efficiency that the added air provides. The scavenging effect provided by valve overlap is very useful tool but only tends to work at a limited range of engine speed, giving benefits at that speed but at the expense of loses at the other speeds. You can end up in a situation where exhaust gases actually flows back into the intake system.

Its due to this reason that race engines normally use barrel or port throttles. Having a throttle near the cylinder prevents large amounts of backflow when it’s closed (during cornering, braking or gear changes). When a conventional intake manifold is used with high overlap, closing the throttle means the whole manifold gets filled with exhaust, causing poor combustion until it gets clean. This is why some oval racers use inlet manifolds, while for the street circuits, port throttles are more common.

However, this is where variable cam timing comes in. It’s something many automotive manufactures have used to great effect and it means that for twin cam engines, each cam’s timing can change relative to the other cam, in addition to the piston’s position. It's therefore possible to design with the best of both worlds – good midrange torque and top-end power.

Another affect of valve overlap is the pressure difference across the exhaust and inlet side.

On a turbocharged engine, where there is a high inlet pressure and back pressure in the exhaust, due to the presence of the turbine, the pressure difference isn’t so great that too much inlet charge flows out.

However, on supercharged engines, where the inlet pressure is high but there is no exhaust back pressure, too much overlap means that inlet charge will go straight out of the exhaust port. Therefore a supercharged engine don’t run large amounts of valve overlap.