The rotation of the cam lobe causes the valves to open and normally steel coil springs are used to make sure that the valve stays in contact with the cam lobe and closes again after the cam nose has passed over it. 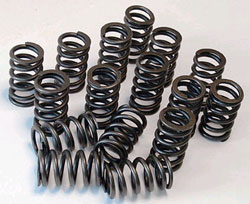 With uprated camshafts, which will accelerate the valve much quicker than a standard cam, either uprated or additional springs will be used to control the valve. There are several situations where this is critical.

If the acceleration of the valve off its seat is too harsh, a situation called ‘valve float’ can occur, where the valve bounces off the cam lobe and therefore opens sooner or further than it should. This can cause the problems with the valve-to-open piston clearance, as it can effectively open too early and hit the piston.

Another possible detrimental effect is ‘valve bounce’ where the valves are closing are so quickly, when they hit the valve seat they can literally bounce off.

Uprated springs can help in both these situations. However, springs on their own are not infallible.

The actual spring can end up with a resonance set up within it and this means it can’t control the valve properly.

Admittedly this tends to happen with very aggressive cam profiles or very high speeds. The solution adapted for the formula 1, arguably the ultimate engines, was to replace coil springs with air versions. It was this step that allowed F1 engine speeds to climb from around 16000rpm to the 20,000rpm that they are now capable of hitting.

Air springs are small cylinder with a predetermined amount of air under pressure in them. When the cam opens the valve, the air spring compresses, and hence, the pressure inside goes up.

This pressure then acts as the spring force to hold the valve against the cam and close it. As the system is based on air, there is negligible mechanical force and hence, and no nasty resonance. The valves are therefore under much better control.