An intercooler is used to cool the compressed air, which has been heated due to compression. The cooler compressed air is more dense and thus generates more power. 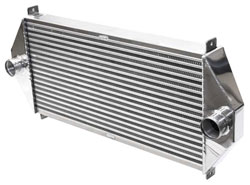 As air is pumped through either a supercharger or a turbocharger, it is having work exerted upon it, by virtue of being moved from one place to another and being compressed. As a result, its temperature will go up.

Firstly, as any gas gets hotter, its density decreases. Therefore, hot air is less dense and will burn less fuel and thus power goes down. Conversely, cold air is denser and you can burn more fuel in the available oxygen to produce more power. That’s why most engines feel like they are pulling a lot harder on cold or damp mornings.

The other main drawback is that as the air entering the engine gets hotter, then the engine moves closer to the point where detonation can occur, with the potentially disastrous results that can bring. So reducing the temperature of air going into the engine is definitely a good thing.

Most turbo engines will have an intercooler of some type, to reduce the air temperature as much as possible.

An intercooler is a heat exchanger, normally located at the front of the car in the air stream. The compressed inlet air passes through the intercooler itself and is cooled by air flowing across the intercooler matrix, in the same way as the radiator cools the engine coolant.

The important key to cooling the charge is without reducing the boost pressure. In practice, this is very difficult and generally, some boost reduction will occur. However, the benefits of a cooler charge are worthwhile.

The inlet is designed to disperse the charge throughout the matrix, so it can be cooled effectively by the air flowing over it. The outlet tank then collects the charge and channels it out of the cooler and into the inlet manifold.

There are three main types of intercooler:

The OE replacement will generally be around the same dimensions as the original but a bit thicker and bit longer. However, they will be limited by the original mounting location and the air flow that provides. A larger front-mounted item will provide more area for the inlet charge to be cooled by the air flow across it. However, its larger volume will mean that it won’t do anything until it’s full of air. This can take a while, especially while the turbo spools up, and that can lead to increased lag. Once the engine is in high RPMs and the turbo is spinning, they generally work well.

The third variety is a charge cooler which is an air/water cooler, with liquid coolant removing heat from the inlet charge, especially useful when air flow across the intercooler isn’t enough on its own.