The supercharger is run mechanically by the engine. Its main function is to compress air and force it into engine, thereby more fuel can be burnt and thus more power can be generated. 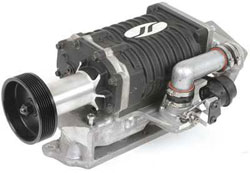 The supercharger has been around for many years, almost as long as the internal combustion engine itself.

The term supercharging technically refers to any pump that forces air into an engine - but in common usage, it refers to pumps that are driven directly by the engine as opposed to turbochargers that are driven by the pressure of the exhaust gasses. A supercharger can be powered mechanically by belt, gear, or chain-drive from the engine's crankshaft.

There are three types of superchargers: 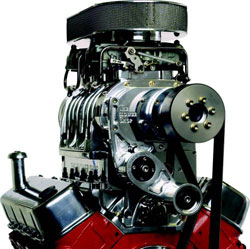 The main difference is how they move air to the intake manifold of the engine. Roots and twin-screw superchargers use different types of meshing lobes, and a centrifugal supercharger uses an impeller, which draws air in. Although all of these designs provide a boost, they differ considerably in their efficiency. Each type of supercharger is available in different sizes, so that a match can be done to the engine attributes, such as engine displacement.

The biggest disadvantage of superchargers is that they steal power as it helps generate additional power. Because the crankshaft drives them, they must steal some of the engine's horsepower. A supercharger can consume as much as 20 percent of an engine's total power output. But because a supercharger can compress air and help increase more power, most think the trade-off is worth it.

An additional benefit is, compared to a turbocharger, is the instant response. As the supercharger is driven off the crankshaft, it will increase speed in the same rate as the engine, thereby having instant response and no lag.